Drug-Nutrient Depletion: What it is and how HDRX can help At HDRX, our clinical pharmacists have hand-selected premium nutritional products to help restore nutritional imbalances caused by dietary deficiency or medications. Contact our pharmacists to get the best fit for your nutritional needs.

Are you or your patients experiencing muscle cramps, low red blood cell counts, numbness, fatigue, weakened bones, or constipation due to medication use?

These side effects might not be directly from the medication but rather from drug-nutrient depletion. Drugs can either enhance or interfere with how nutrients are used and absorbed by the body. If multiple medications are being used at once, the likelihood of nutrient depletion increases.

What is drug-nutrient depletion? When over-the-counter medication is used for a prolonged period for chronic illnesses, it can take a toll on the rest of the body. The medications can impact nutrient digestion, distribution, absorption, and excretion.

In a study review published in Pharmaceutics, nutrient depletion is categorized by common chronic illnesses and the drugs prescribed for them including aspirin, calcium channel blockers, statins, diuretics, and corticosteroids. The article explains that drug-nutrient reactions can be on a chemical, physical, or psychological level. Many times, multiple factors contribute to negative drug-nutrient interactions. It can be caused by pre-existing factors such as age, sex, genetics, dietary restrictions, and duration of drug use.

Harvard Medical School noted that such drugs can affect the natural process of the body such as whenstatins inhibit the production of coenzyme Q10 (CoQ10), which preserves energy supplies within our body’s cells. Other forms of depletion are caused by acidity and pH level changes in the gastrointestinal tract, later affecting the absorption process. Calcium, vitamin D, vitamin B12, and magnesium were found to be the most commonly depleted nutrients.

While young and middle-aged adults are affected by drug-nutrient depletion, older individuals are at an increased risk. As individuals grow older, physiological changes occur which can change their nutrient intake and needs. These needs are not always met on their own.

This is where we come in.

If you think you or your patients are experiencing drug-induced nutrient depletion, call or stop in to talk with our pharmacists. We can create a plan and suggest supplements or other forms of medication to balance nutrient levels. As compounding pharmacists, we can create individualized medications and therapies that potentially reduce the level of nutrient depletion by sizing the dose directly for your need.

Many people believe that they can simply take a multivitamin or a supplement to balance their nutrient levels. It is important to speak with your pharmacist or medical professional before taking supplements since adding vitamins and supplements can alter the effectiveness of the drug.

Schedule a consultation with our pharmacists today to understand more about how medications can affect nutrient levels. 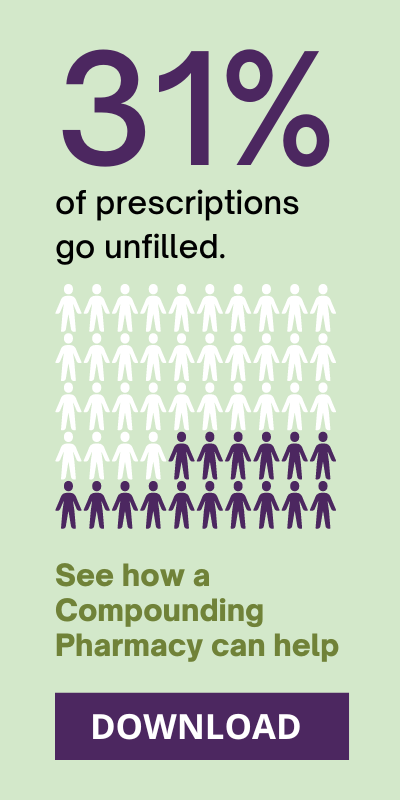